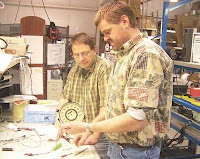 McLeod acquired the company in 2001 from an Oregon couple looking to retire. He moved it to the same Boyne City building as Great Lakes Motor Works, a car restoration business he has run for the past 13 years. Early on during McLeod's ownership, Classic was a one-man operation. Now it includes 22 employees, and has dealers in five countries. Given the state of the economy, McLeod expects Classic's growth will moderate somewhat in the near future. While the company president said it would be nice to move up in Inc.'s rankings, "my personal goals are just to do high-quality business with high-quality staff," he added. (Photo and story courtesy of the Petoskey News-Review). Full story.
Posted by Jim Baumann at 6:23 PM No comments: