The filing deadline has passed and there are 4 candidates for 3 open seats on the Boyne City Commission. Delbert “Gene” Towne is running unopposed for a two-year term on the  commission. Earlier this year, Towne was appointed to fill the seat vacated by Dan Adkison, who moved out of the city, and there were two years remaining on his term. The other 3 candidates are running for two, four-year terms. They are: Mark Dole,owner of Pineapple Cottage Care; Derek Gaylord, jail administrator for the county Sheriff’s Department; and Tom Neidhamer, retired teacher and Planning Commission chairman. One additional candidate had filed a petition, but it was found that he had not been a registered voter in the city for a full year, as the city charter requires; so his name will not appear on the ballot. Not running for reelection are Mayor Chuck Vondra, who is stepping down after 12 years on the commission, and Commissioner Mike Cummings, who has served for four years. The Boyne Area Chamber thanks them both for the major time and effort they have devoted to public service for the betterment of Boyne City.

> The election is Nov. 8, and the Chamber will hold a city candidates forum at 6:30 p.m. Tuesday, Oct. 25, at the Boyne District Library Community Room.
Posted by Jim Baumann at 6:13 PM No comments:

A new Leadership Charlevoix County program is being organize by the county’s four chambers of commerce, including the Boyne Area Chamber. The goal of the program is to to identify new and emerging leaders while strengthening individual leadership skills and increasing awareness of community needs. Leadership Charlevoix County will consist of an orientation, full-day monthly sessions from September through May, and a graduation ceremony. Topics for the sessions include: Connecting with Your Governmnt; Health and Human Services; Economic Development; Education Today; Building Your Tool Box; Arts, Culture and Philanthropy; Your Environment and Natural Resources, and Where Do We Go from Here? Each session will cover various skills associated with leadership and will include community leaders, businesses, and projects throughout the county. Funding to help launch the program was provided in a grant from the Charlevoix County Community Foundation. Website: www.leadershipcharlevoixcounty.com. Application form. The deadline has passed for participating in the inaugural 2011-12 program, however if you would like more information about next year's program, contact Jim Baumann, executive director of the Boyne Area Chamber, 231-582-6222, or Mishelle Shooks, program coordinator of Leadership Charlevoix County, at the Charlevoix Chamber of Commerce, 231-547-2101.

Posted by Jim Baumann at 6:09 PM No comments: 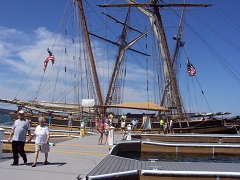 The Pride of Baltimore II tall ship will be returning to Boyne City the weekend of July 29-31.  Last August, the Pride of Baltimore and the schooner Lynx visited Boyne City, and large crowds turned out to see them up close. That visit and this year’s were arranged by Wally Kidd of Kidd & Leavy Real Estate. Kidd's late father Jack lived in Baltimore and was one of the founders of the organization that oversees the Pride of Baltimore II, which is a reproduction of an 1812 era privateer. Sponsors making this year’s visit possible are Catt Development, Northwestern Bank, Friends of the Boyne City Library, American Waste and the Wally and Margy Kidd family. Ship tours will be available daily at a charge of $5 for adults; children 12 and under are free. Two-hour daily sails around Lake Charlevoix will be available at $50 for adults and $30 for ages 6 to 12; reservations can be made online or by calling 888-557-7433. Opportunities for business or group receptions, both sailing and dockside, are also available; for information, call Wally Kidd at 231-439-2800 or 231-838-2700 (cell). Photos from last year. *  Pride website.
Posted by Jim Baumann at 6:03 PM No comments: 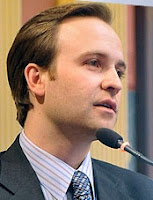 Lt. Gov. Brian Calley is scheduled to come to Boyne City July 20 for a ribbon cutting ceremony at the 1910 Water Works Building at the intersection of Park and Division Streets. The public is invited to attend the ceremony at 3:30 p.m. Wednesday. Calley is attending because state grants helped improve the city water system and restore the 100-year-old building. News-Review article.
Posted by Jim Baumann at 5:58 PM No comments: