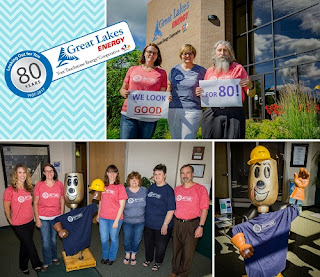 Great Lakes Energy, headquartered in Boyne City, celebrates 80 years of service this year. Electricity first came to many parts of rural lower Michigan in 1937 and greatly improved the quality of life for farmers and rural residents. The work of four separate electric cooperatives (Top O’ Michigan in Boyne City, O&A in Newaygo, Oceana Electric in Hart, and Western Michigan in Scottville) helped make that possible. Through mergers, the four joined in 1999 to become Great Lakes Energy, one of the largest electric cooperatives in the country and the largest in Michigan. Great Lakes Energy has over 14,000 miles of power line (third largest of all electric co-ops in the United States) that deliver electricity to over 123,000 members. Great Lakes Energy has nine offices throughout its 26 county service area, employs 235 people and remains a locally-owned cooperative governed by the member-owners it serves.
Posted by Jim Baumann at 9:15 AM No comments: 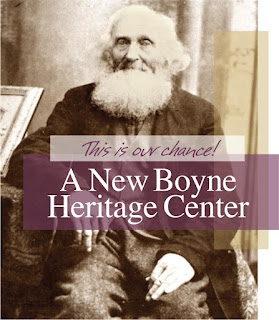 The City of Boyne City is excited about the community's goal to form a new nonprofit organization with a board of directors, executive director, support staff, membership and an organized pool of volunteers. In the plan, leadership and management of the new heritage center will be transferred to the new board, who will take over the former duties of the Historical Commission. The next step is to find interested and passionate people to form that founding board of directors. Those with passion, vision, optimism, expertise, connections and a strong sense of teamwork will make all the difference in these crucial formative days. If you are interested in serving on the new board, contact Kecia Freed at 231-622-2492 or kecia@twin-valley.net.
"Boyne City's Historical Museum is at a breathtaking point of opportunity," Freed said. "With dedicated space in our beautiful new municipal complex, we can transform the museum into a flagship attraction and heritage center for Boyne City and surrounding areas. The vision is an interpretive center and for all things historical in our area - sharing knowledge, resources, energy and ideas with the library, schools, historical groups and businesses."
> More information and board application form. 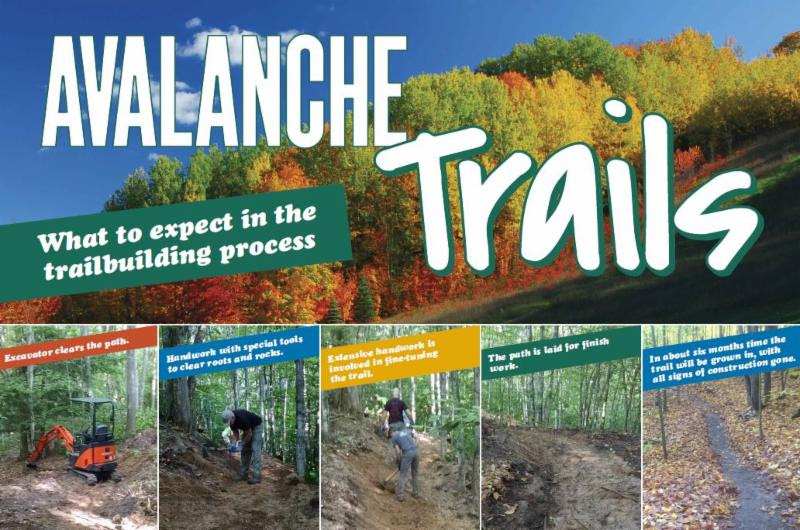 From the Top of Michigan Mountain Bike Association: The next and final phase of Avalanche trails is under way. Dirt Artisans are on site and have already completed over 2000 ft. of the final connector loop that will tie together all the new trails at Avalanche. Early reports are that this is now available for mountain bike riding and it's going to be fun. In addition, they are completing the improvements to the trails that were built last year and firming up the various sandy spots that remained. They are a great team of professional builders and are committed to making this trail exactly what was desired. TOMMBA volunteers have trail signage materials on their way and will also soon have clear directions installed at each signpost. Thanks to all of you for your contributions and to all the volunteers who are out there clearing trail, building trail, designing signage, fundraising, financial management, board member time, providing input, and generally helping to make our trails better every year. Details.
Posted by Jim Baumann at 7:41 AM No comments: 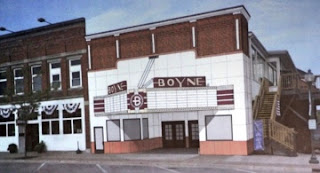 From the Petoskey News-Review: An April 29th event at the Boyne Theater brought glimpses of restoration plans for the building, and also generated more than $7,500 to benefit the Charlevoix Area Humane Society. Theater owner Rich Bergmann revealed plans for the property on Saturday. The original venue opened in 1904 and became a movie theater in 1907. In 1916, it was cleaned and remodeled before being sold by the family in 1927, and renamed the Boyne Theater. The theater operated until 2006. While renovations are costly, the renovated building will have promising features both inside and out. Blueprints for a one-room theater include features such as a projection screen, theater seating for 290 people, a performance stage, a dance area, a bar with seating, new restrooms and handicap accessibility. The rehabilitated venue will feature hospitality service and have use of a liquor license. Full story.
Posted by Jim Baumann at 11:30 AM No comments:

From the Petoskey News-Review: An expansion effort is brewing for a Northern Michigan coffee shop, which plans to soon open new outlets in East Jordan and Boyne City to complement its downtown Petoskey location.

"We are so passionate about Northern Michigan and excited to be expanding into two more really cool towns!" said Brittany McNeil, who owns North Perk Coffee with husband, John. "Though the vibes are pretty different, both East Jordan and Boyne City drew us in because we felt like they had niches ready and waiting for a coffee shop: a need for open, casual work and meeting spaces for the community to nestle into."

North Perk's owners opened the Boyne City location - at 202 S. Lake St., next to the 7 Monks Taproom beer bar - on June 20th. "Boyne City has been steadily growing and we’ve watched other strong businesses open locations and do well while serving and adding to the community, and we are excited to add more value to downtown Boyne with our shop," McNeil said. Full story.  North Perk website.
Posted by Jim Baumann at 9:21 AM No comments:

Mark your calendars for Boyne Area Restaurant Week, June 12-18 and again in the fall for the week of October 16-22. Here are details on the June restaurant special offers. This is your chance to try new restaurants and food products. Restaurants, bars, delis and sandwich shops will all be offering specials: Two-for-one prix fixe meals for $35 or less at large restaurants and more great specials from the others. Here are the 22 participants:

> Flier with the list of all 22 participating restaurants/markets.
Posted by Jim Baumann at 10:52 AM No comments: