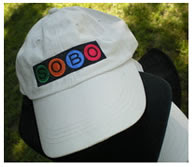 Opinion column by Petoskey News-Review Editor Kendall Stanley, 9-21-09:  Ideas matter, which is why there are successful entrepreneurs in America and we're not just a nation full of navel lint-picking daydreamers. Nurture an idea long enough, move on it and work hard, and who knows what might happen at the other end? Which takes us to that audacious idea that is SOBO. I will grant you that SOBO is not yet a household word, not even in its native Boyne City. But think about how long it took SoHo in New York City to reach a recognizable level of familiarity, and you can see that all is possible. So what's a SOBO, one might ask?

Well, SOBO stands for South Boyne, a moniker developed by four businesses in - where else - South Boyne City. It may have been a whimsical idea at first (and if you know some of the people involved, whimsy is not a scarce commodity), and there may be only four businesses, but the idea is a great one.

On hand at the creation were Cindi Franco's Cool Stuff, Lake Street Market, the Boyne Arts Collective and the latest, the Freshwater Studio, which opened in what had been an abandoned building on Lake Street. Freshwater Studio is the brainchild of Boyne area artists Tony Williams, Robin Lee Berry and Glen and Cindy McCune, who display their work and invite other Northern Michigan artists to showcase their art as well. (SOBO hat photo courtesy of Lake Street Market, which sells these and other hats.)

Posted by Jim Baumann at 5:18 PM No comments: