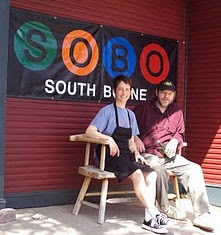 By Kim Schneider: Boyne City wasn’t banking on a “name it and they will come” phenomenon when local market owner Liz Glass created colorful signs that read SOBO for a section of her “South Boyne” neighborhood. Not surprisingly, the idea of a sign modified from a Manhattan subway logo to grace a small town best known for this week’s National Morel Mushroom Festival started as “tongue-in-cheek funny,” said Jim Baumann, executive director of the Boyne Area Chamber of Commerce. “People are now calling us, saying they want to be in SOBO,” he said. In a town just a few blocks big, it’s not hard to find the so-called SOBO, near Lake Charlevoix and on the south edge of town. These days, there’s usually a party of some sort going on there. Artist Anthony Williams and a group of collaborators last July opened Freshwater Studio after transforming a building empty for 30-plus years. The brick walls and massive front windows now showcase artworks inspired by nature, the place often buzzing with artist workshops or concerts coordinated by Williams’ wife, folk singer Robin Lee Berry. Full story.
> Kim Schneider is the travel columnist for Booth Newspapers. Pictured above are Liz Glass of Lake Street Market and Tony Williams of Freshwater Studio.
Posted by Jim Baumann at 5:40 PM No comments: