Leaders give updates at State of the Community event

Posted by Jim Baumann at 1:52 PM No comments: 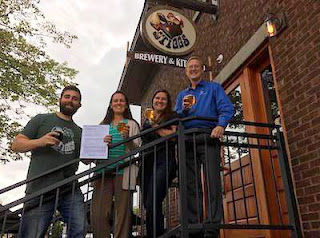 Boyne City’s Stiggs Brewery & Kitchen has been awarded Federal Historic Tax Credits through the National Park Service. The tax incentive is used to offset federal income tax equivalent to twenty percent of the total qualified renovation cost, and remains good for 20 years.
Stiggs Brewery & Kitchen started the Historic Preservation Certification in 2015. The three-phase process is available for historically certified buildings, such as the Boyne City Railroad Office Building, which Stiggs operates out of. In order to receive certification, stipulations needed to be met. This included keeping the building feeling like a railroad office, but also functional as a brewery and kitchen. No exterior changes could be made, such as vents through the walls, elevated patios, or changes in design that would take away from its historical relevance.
“This is a huge win for Stiggs and Boyne City, as it seems it is usually very difficult for project under $5 million to receive historic tax credit,” Kelsie King-Duff, Boyne City Main Street Executive Director, said.
Harold Remlinger, AIA Principal Architect, along with the team of design professionals, at DesignTeam Plus LLC did an excellent job keeping the building historically relevant and transforming it into Stiggs Brewery & Kitchen. Boyne City’s Todd Wright, from Wright Building & Design, was the general contractor.
Walking through the main doors visitors immediately get a feel for the old Boyne City, Gaylord & Alpena Railroad Headquarters. A corridor leads down the center with glass partitioned dining rooms and a kitchen to the right, and a large open dining room to the left featuring original wood floors, wood walls with 15 foot windows and a wood ceiling.
“Stiggs is fortunate to operate out of a building circa 1899, and excited to keep carry on the building’s legacy,” Mike Castiglione, Stiggs Brewery & Kitchen Owner, said.
Stiggs Brewery & Kitchen is one of two building on the National Register of Historic Places in Boyne City’s Central Historic District. An array of other buildings contribute to the Central Historic District being named as a whole to the Register. The building was originally part of White Timber Logging Company camp and was on the north side of the river. Except for the building, the entire camp burnt in 1916. It was picked up and moved in 1917 to its current location at 112 South Park Street in downtown Boyne City. At the time of the move it became part of the Boyne City, Gaylord and Alpena Railroad. After the railroad, 112 South Park housed the local paper, real-estate office and a wellness center until renovations for the brewery started in the fall of 2015.