Northern Michigan Sports Medicine Center (NMSMC) will open its seventh facility in Boyne City this July. The business will occupy 4,573 square feet in the former bus garage building at 210 S. Lake St., which most recently served as the home of the Boyne Arts Collective. The development owned by Catt Development will also include 7 Monks Tap Room, slated to open in June.
"We are pleased to have NMSMC as a partner in our development," said developer Glen Catt. "I believe having a good mix of tenants is vital to the success of any development. NMSMC is a proven operator that will draw people to downtown Boyne City all year long and during the hours when traffic and parking aren't an issue. They have a history of being involved with the communities they are in, and will be a great addition to Boyne City."
Started in 1987 by Chuck Smith, Michigan Sports Medicine Center is an outpatient facility that provides physical and occupational therapy, aquatic therapy, and specializes in athletic injury rehabilitation. Services include sports medicine, physical and occupational therapy and athletic trainer services designed to meet individual needs. The business will employ 5 or 6 people in Boyne City and another 4 or 5 indirectly supporting this facility. "We are committed to providing the highest quality care with a strong focus on patient satisfaction," said Smith, the owner and founder. "People who reside in and visit Northern Michigan lead active and vigorous lifestyles. They enjoy activities. When injury or illness threatens their activity, we offer a proactive way to resume their lifestyles." Full press release.
> To learn more about Northern Michigan Sports Medicine Center visit their website. To learn more about the South Lake Street Redevelopment project, contact Boyne City Main Street at 231.582.9009 or mainstreet@boynecity.com.
Posted by Jim Baumann at 9:07 AM No comments: 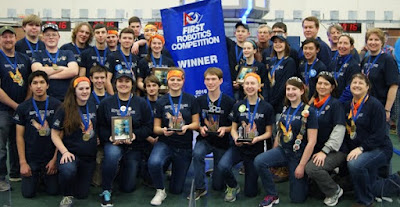 After two days of intense competition at the FIRST Robotics event in Standish-Sterling, Boyne City Blaze and their two alliance partners came out victorious. In addition to the win, the team also received the Entrepreneurship Award and the Industrial Safety Award, both of which come with points that help the team on their quest to qualify for the state competition in Grand Rapids in April.
“To be on the winning alliance at a 40-team competition is a great accomplishment,” said team build mentor Steve Jarema. “There were rookie teams there who had just built their first robots and teams that have been doing this for 20 years. We were pleased with the performance of our robot and were consistently ranking in the top two or three teams throughout the preliminary rounds.”
BC Blaze was partnered with the NC GEARS team from Fremont, and the Freeland Fabricators, from Freeland, to comprise the top ranked alliance and the eventual winners. Other area teams, including Petoskey, Grayling, East Jordan, Central Lake, and Beaver Island, progressed to the playoffs but were eliminated in the quarter- and semi-final rounds.
The Industrial Safety Award was presented to the team based on their preparation for any injuries or potential issues that might arise, their response to actual events at the competition, and an interview of the team Safety Captain, Elizabeth Mansfield. The Entrepreneurship Award was one that required the submission of a business plan prior to the competition. Twenty-two students and ten adult mentors worked since early January to design and build the robot, submit information for awards, coordinate travel plans, and prepare for competition. On a community level, several local companies helped with the fabrication of parts and all of the team’s sponsors contributed to its success through their financial support.
The Blaze robot weighs 90 lbs., maneuvers with tracks, has an arm to open, raise, and lower defenses, and picks up and shoots balls called boulders in the 2016 FIRST Stronghold game that has a medieval castle theme. It is operated by a four person drive team for the majority of each two and a half minute match but runs through a series of preprogrammed actions for the first 15 seconds during the autonomous period. The drive team at the Standish-Sterling event was comprised of team captain Jacob Brewer as the driver, Andrew Yang as the arm operator, Eli Korthase as the drive coach, and Noah Lockman and Max Matelski sharing the human player role.
“It is important that younger team members like Andrew and Noah get the experience of competition to carry those skills on to future years of the program,” said Brewer, a senior. “I have been on the drive team since my freshman year and know that I have benefited from having those years of experience.” Korthase is also a senior team member this year, Yang is a sophomore, while Lockman and Matelski are freshmen.
BC Blaze is in its fifth year of FIRST Robotics participation and has grown into a year round program that provides a wide variety of opportunities for students to learn skills including fabrication, programming, project management, public speaking, fundraising, marketing, business, and teamwork. The team does community outreach and fundraising activities when it is not building a robot and going to competitions.
The next goal for the team is to put in another good performance at their next FIRST Robotics competition at Lake Superior State University on April 1 and 2. The team welcomes contributions of time, expertise, resources, and funds from community supporters.
> Anyone interested in more information about the team can contact the team’s head mentor, Karen Jarema, at Boyne City High School at 231-439-8100 or via email at bcblaze@boyne.k12.mi.us.
.
Posted by Jim Baumann at 6:23 PM No comments: