Stiggs Brewing to serve up beer, food starting in January

From the Petoskey News-Review: As he prepares to open Stiggs Brewing Co., Mike Castiglione sees a couple of reasons why its downtown Boyne City setting should be favorable for business. Castiglione expects a soft opening for the brewery at 112 S. Park St. during the first week of January and plans a grand opening on Jan. 27. “Boyne City is a vibrant small town,” Castiglione said. “It’s really growing.” And, with Stiggs joining other beer-focused establishments downtown — including two taprooms that have opened during the past year — “I think if you’re a beer connoisseur, you’ll come to Boyne City to try them all.” The bar at Stiggs will feature more than 30 taps. About seven of the brewery’s own beer selections will be available at launch. Full story.
Posted by Jim Baumann at 1:32 PM No comments:

Which of these deserving nominees will win awards at Annual Meeting on Jan. 19th?

> Here are the winners, announced Jan. 19th at the Chamber's Annual Meeting.

Posted by Jim Baumann at 7:35 PM No comments: 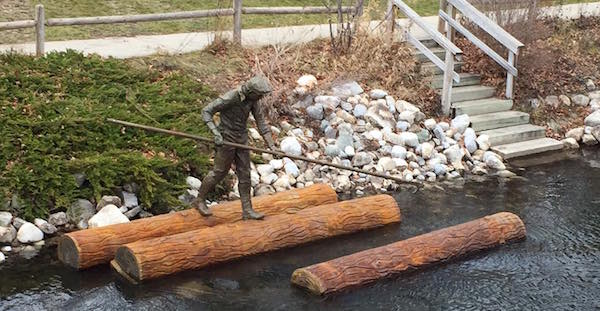 After years of planning and months of construction, a new sculpture celebrating Boyne City's historic roots was installed on the banks of the Boyne River in the heart of the downtown on Wednesday. The permanent sculpture entitled "The Last River Draw" was created to celebrate Boyne City's lumbering heritage. This life-size sculpture represents a "River Rat" using his pike pole to help move the logs down the river. The sculpture depicts the interaction of the person, log and water. While the sculpture is anchored on land, it is partially out in and floating on the river for a very realistic representation. Local artists Martha Sulfridge and Wally Barkley along with local artisan and builder Andy Poineau are the three key people behind transforming the vision and models of the sculpture into the fully developed reality. The project has been sponsored by the Boyne City Main Street program and its Design Committee. It was funded primarily thru donations from members of the public in a crowdfunding campaign and a $25,000 matching grant from the Michigan Economic Development Corporation. A formal dedication will be help at a later date.

Pictures by Walter Barkley showing the installation, step by step.
Posted by Jim Baumann at 5:24 PM No comments: