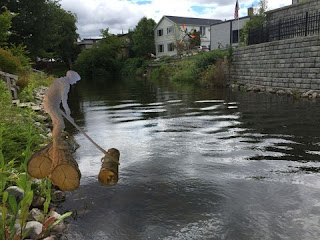 It came down to the final few days, but the Boyne City river sculpture crowdfunding campaign reached its goal – and then some. The campaign will support a project to create a life-size bronze sculpture of a logger near the mouth of the Boyne River drawing in logs, depicting the early lumbering era.
With the crowdfunding campaign coming to a close, the goal of $25,000 was not only reached, it was exceeded with more than $29,000 raised. The $25,000 will be matched by two state agencies that sponsored the effort, bringing the total amount available for the project to $54,000. “We had such an outpouring of support in this last week,” said Lori Meeder, executive director of the Boyne City Main Street Program. “I had multitude people call to ask where we were at and how much we still needed – ready to make up the difference, so that we didn’t jeopardize the matching grant. This is truly a community project that is near and dear to so many.” The additional funds will help pay for permits, possible cost overruns and to support the city’s Walkabout Sculpture Tour, which The Last River Draw will now be a part of as a permanent piece.
During the last push of the campaign, Meeder received a call from Bob White in Colorado. Bob had been watching the progress for several weeks and inquired about the benefits of the Lumber Baron $2,500 level. This sponsor level allows the donor to have their name on the plaque that will be placed by the river sculpture. After more discussion, Meeder discovered that Bob was the great nephew of William H. White, the lumber baron who is credited with starting the lumber industry in Boyne City. “This was just so fitting and special that his donation helped put us over the goal and he is a descendant of the White Family. It really doesn’t get any better than that,” Meeder said.
More than 500 people donated to the crowdfunding effort. Besides the many online donations, there were fundraising events at Boyne River Inn, Café Sante, BC Pizza/BC Lanes, Northern Table, the Boyne Bee at Friggy’s SOBO Pub, the Girl Scouts’ Penny Drive, and that a bottle drive at Family Fare. Major donations came from the Boyne Area Chamber, the Lions Club, the Rotary Club, Freshwater Art Gallery, the Charlevoix County Community Foundation, Pat O’Brien & Associates, Boyne City Hardware, Wildwood Rush Zipline, Barden Lumber, The Wood Shop, Boyne City Gazette and Lakeside Properties. The sponsoring agencies providing the $25,000 funding match are the Michigan Economic Development Corporation and the Michigan State Housing Development Authority
“There are so many people to thank but I have to mention one who truly stands out - Lindsay Regan, our fundraising chair,” Meeder said. “From the beginning of our campaign she was a champion for the project. She put all of her energy and enthusiasm into it.” said Meeder. Sadly, Lindsay passed away on April 6th but by then it was clear that the funding goal had been reached. She also saw the Boyne Bee Champion Plaque go up for public display on the Pat O’Brien building.
For more information on this project, contact Lori Meeder at mainstreet@boynecity.com or 231.582.9009.